Here’s the video for Playford tune The Beggar Boy, from the 1651 manuscript – it was included in subsequent editions right through to the 7th in 1686, and Chappell (1859) notes that there are several ballads written to the tune, as tended to happen with popular tunes.

And here are the dots: 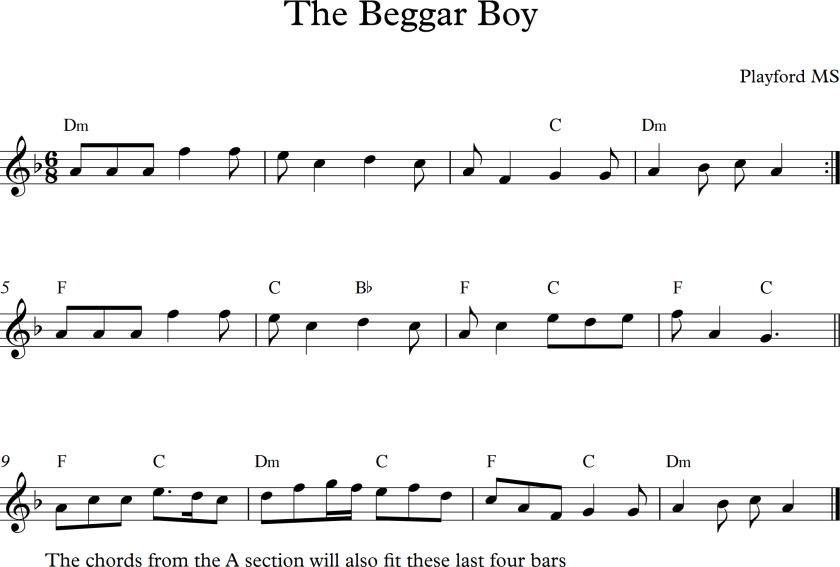 Here are the dots, for those who want to print them out.

We created contrast between sections with drone-like minor chords in the A section and swifter changing major chords in the B section.  I’ve tagged the tune as both major and minor as it can be harmonised as either, giving a different character.

We created a groove for the A section by picking out notes from the D minor and C major triads.  Since Dm and C are neighbours, it’s possible to move between the chords in a scale pattern.  Here’s a link to a chart explaining this: for each of the main beats listed at the top, pick a note from the coloumn beneath. There is an example of how you could do this at the bottom, with notes highlighted in red.  You might want to print this sheet out and circle one note in each column to create your own part.

Deborah is a violinist and violist specialising in English folk music. She trained in viola and Baroque viola at Birmingham Conservatoire, before returning to her first love of traditional music, song and dance. She is a member of Stepling, a band performing English music, step-dance, song and percussion. She also plays for a number of function bands, performing at barn dances and ceilidhs across the UK. Deborah has played with a number of folk artists, dance and theatre projects. She plays with Folk Dance Remixed, a dance company combining traditional dance with hip hop and street dance styles, performing as such events as Car Fest, the Southbank's Festival of Love and Glasgow's Commonwealth Games Festival. She records on a regular basis for a number of people, including The Mystery Fax Machine Orchestra, and for Laurel Swift's 'Travelling with Thomas' musical. Deborah teaches music, song and dance regularly for The English Folk Dance and Song Society, as well as on a freelance basis for various workshop series, festivals and music services. She is currently studying on The Teaching Musician MA degree course at Trinity Laban. View all posts by debfiddle

Classes have moved online for the foreseeable future.  They are held on Mondays, 7:30 till around 8:30, please contact me for a link if you’d like to attend remotely.

We learn a new tune almost every week, and everything is taught by ear, though of course you are welcome to make your own notes.

The class is held upstairs at West London Trade Union Club, 33-35 High Street, Acton, London, W3 6ND. Parking in nearby streets is fairly simple, lots of buses pass the door and Acton Central Overground station is 5 minutes walk.
Monday evening term-times: 7:15pm – 9:15pm.
Cost: £9 per night.
Who comes? Bedroom musicians, beginner musicians, starting-again musicians, younger musicians, late bloomers, musicians that think they can only read the dots, musicians who worry that they can’t read the dots – you are all welcome.