Not to be confused with any of the Shetland tunes of the same name!  I know this tune from playing in sessions and in trying track down it’s origins I’ve found it listed as ‘The New Rigged Ship no 2’ or ‘The Rigged Ship’ in England where its played as a jig, as ‘The Hills of Glenorchy’ in Scotland where it’s played as a march or quickstep, and as ‘The Wild Hills of Wannie’ in Northumberland where it’s played slowly as an air.  There are numerous other titles for it, and variations of it, and it seems well travelled!  Often a sign of a good tune….

The PDF of the tune, chords and bowing/ornaments variations is here, and the dots are below.  We improvised in the B section by making up our own rhythms for alternating between Es and Bs in bars 9-10 and then between Ds and As in bars 11-12, and then back to to Es and Bs for bars 13-14 before picking up the tune again in the last two bars (aka at the ‘tail’).   ‘Stab’ chords played every two bars helped punctuate the changes here. 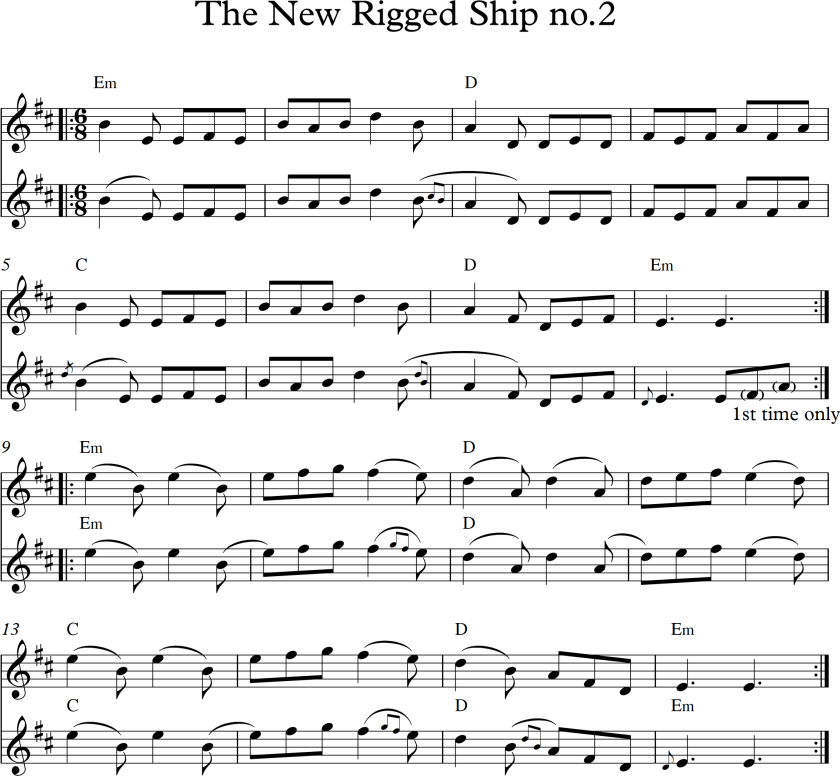 This is a jaunty polka by Devonshire fiddler Fred Pidgeon (yes, I know I’ve spelled his name differently in the title, but this is now the tune and his surname are normally written respectively).  I’ve kept the chords simple to bring out the cheerful, bouncy character, though you could substitute a few Em or maybe some C chords in instead of some of the G majors – have an experiment!  Stephen suggested using a G maj7 in place of the D chords in the first two bars – I like this, but try also replacing the D chords in the fourth and seventh bars with a D6 chords to fit with the slightly dreamy feel that this creates.  We found that the harmony in the B part also fits the tune of the A part, so there are lots of possibilities!

Here are the dots (tune with chords, tune with suggested phrasing and ornaments, and harmony) with a PDF available here.. 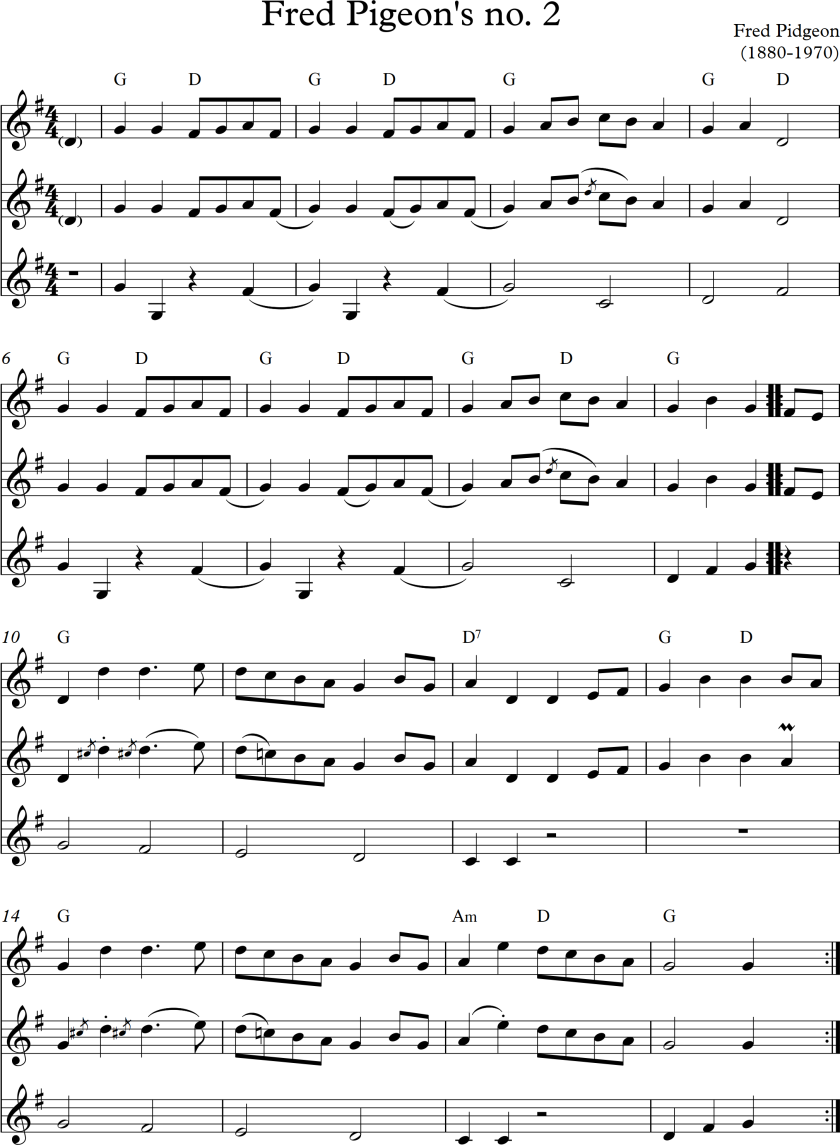 Wednesday Night is a fabulous 16 bar tune recorded as a ‘Country Dance’, and it exists in both the English and Welsh traditions (as Nôs Fercher in Welsh).  The earliest record of it I can find is in a collection by William Clark of Lincoln published in 1770, though it seems to turn up in a few different collections at around that time.  Here’s the tune, harmony, bass line and chords – I’ve not written out a separate chord chart due to the way the chords fit with the rhythm of the tune.  I’ve also added a version with suggested phrasing and ornaments. 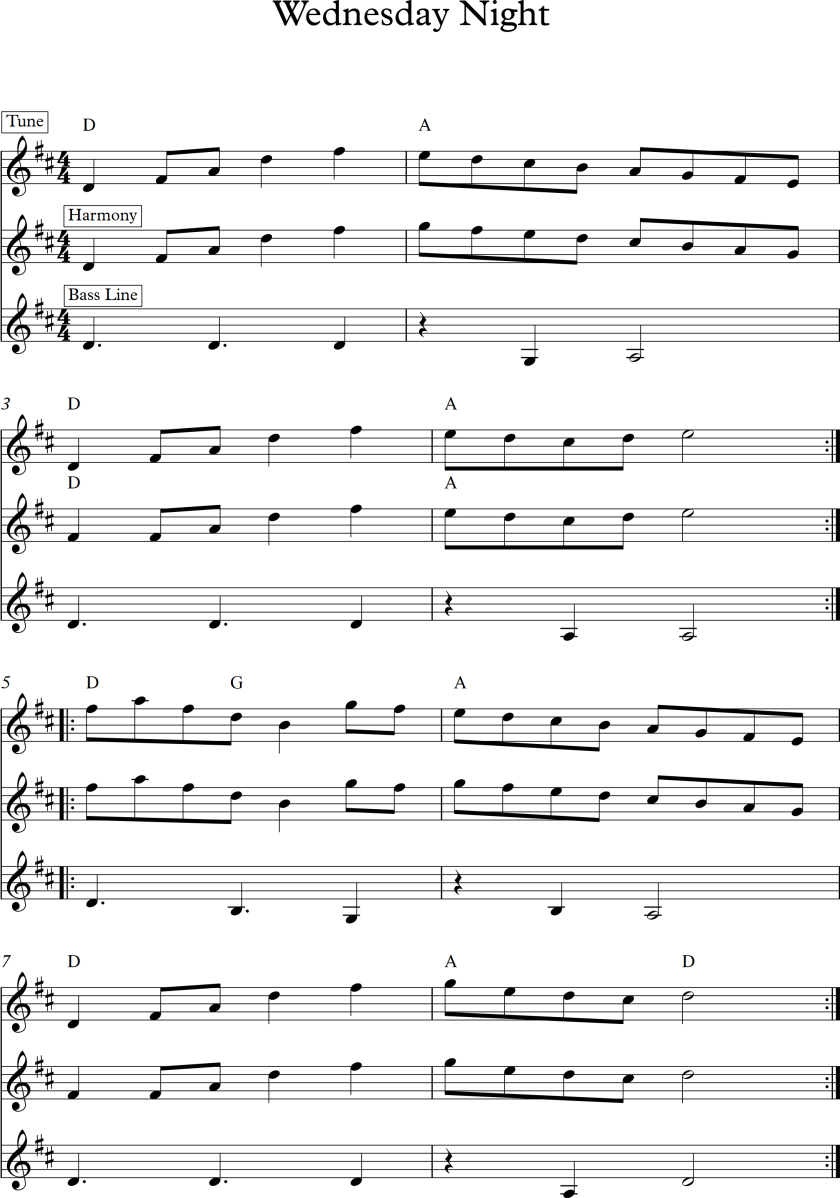 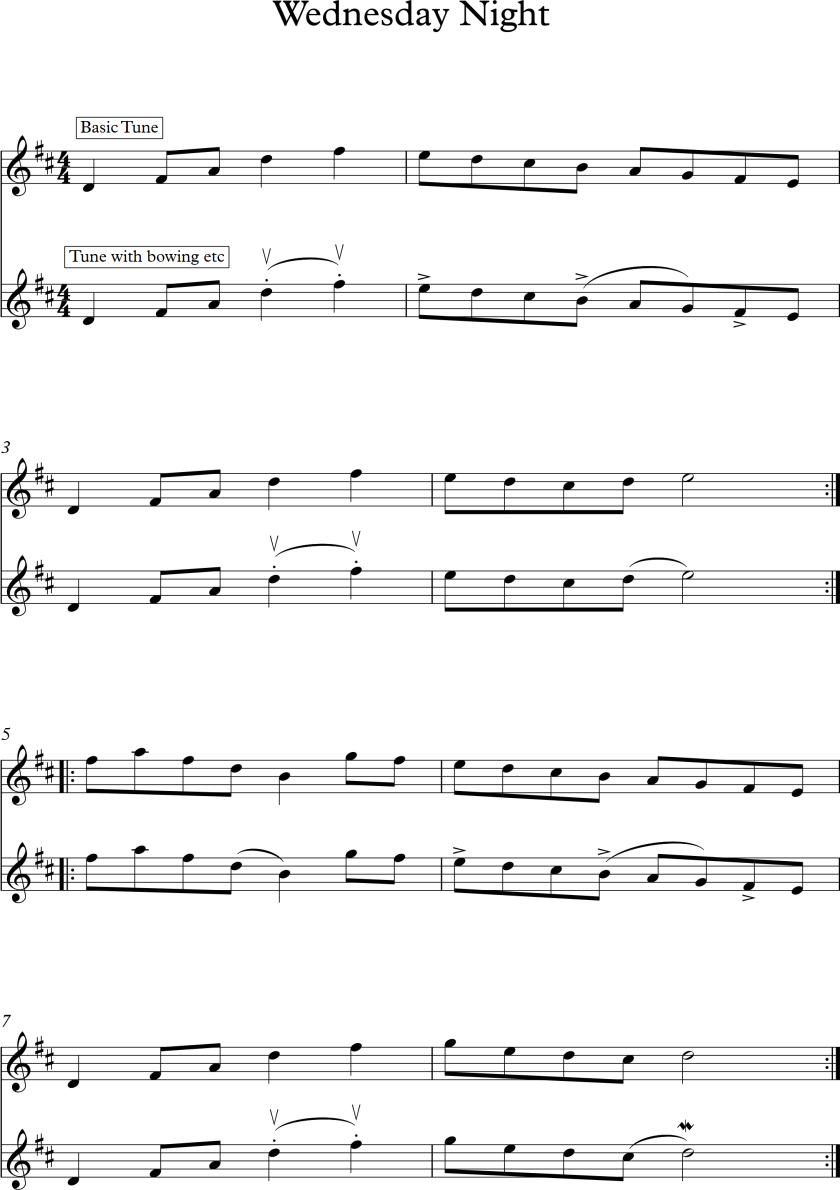 This is an English jig that I know from various sessions, I think I originally learned it from fantastic box player Barry Goodman.  Here it is as a PDF, the tune and chords.  I suggest that we play this in a set after Moll of the Wod.  The harmony for the A part is listed under the tune 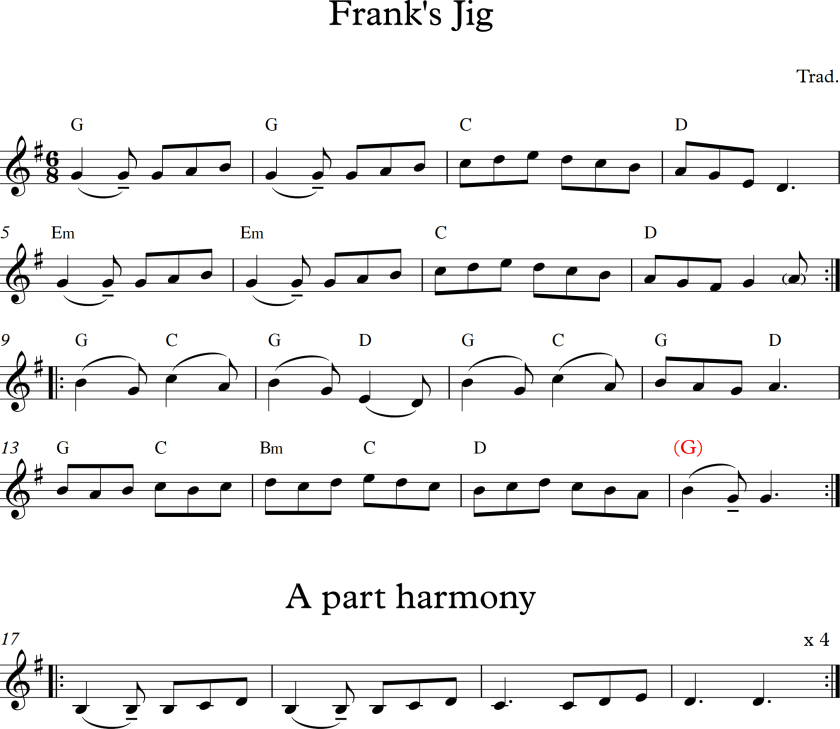 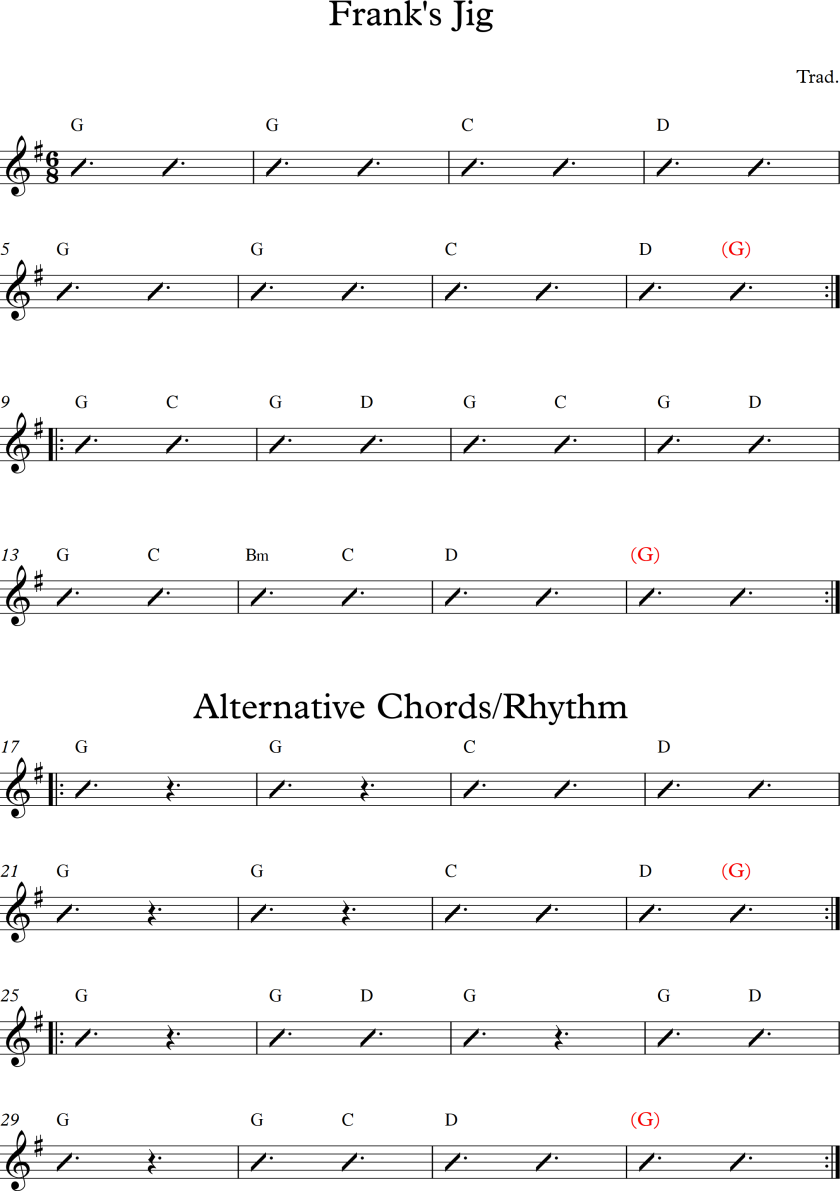 Ealing Sessions alumni Gill Adams has been in contact to let us know about events in Lewes in October.  She writes:

“Lewes folk festival is on the horizon, http://www.lewesfolkfest.org/LFFprogramme.php. It’s a little town festival and very nice, Oct 12/14 – in case you fancy mentioning it. We (Gill and Graham) are running a session in The Volunteer pub near Waitrose in the town on Sat Oct 13 (not The Lamb as stated in the prog). It would be nice to see some Londoners.”

This version of ‘Dear Tobacco’ is from the Anne Geddes Gilchrist collection, collected from William Docker in Westmorland, England.  I can’t find a date for it, but John Offord (always a good source of knowledge) says it is “not a polka. Polkas came later in the 1840’s. It is a type of reel which is found in books from the 1700’s. These tunes, with patterns of 4 semi-quavers [written out here as quavers] were only played in Scotland or Northern England”.  This version is also in Dave Townsend’s English Dance Music book, Volume 2.

Here are the dots for the tune: 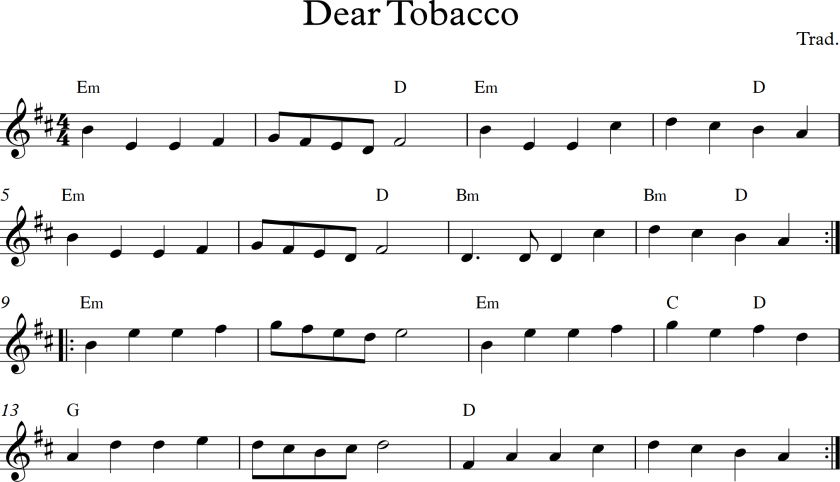 I’ve written out a seperate chord chart below (with an extra Bm chord, apologies!) with an alternative, slightly crunchier version that doesn’t resolve at all. 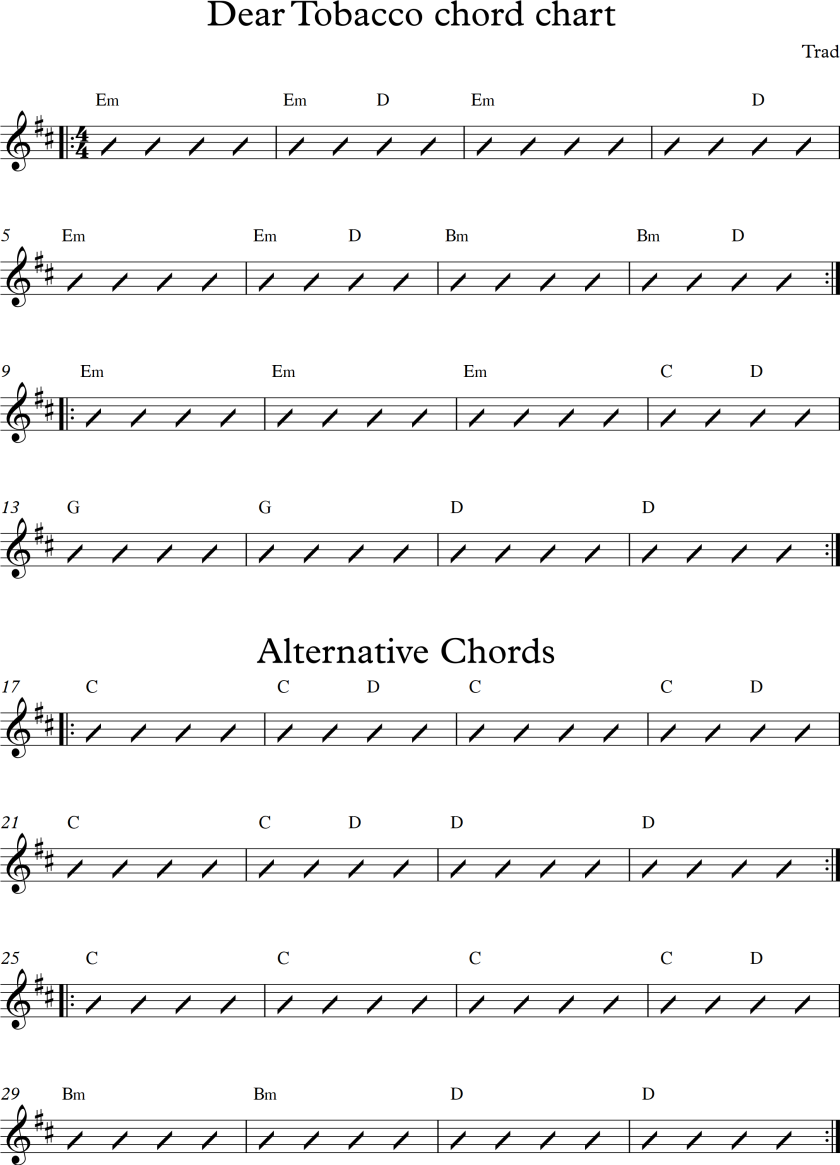 I suggest we start with this tune and then go into the Duke of Perth’s reel .  I’ve created a page called Tune Sets where I’ll add PDFs of sets, to make it easier to put everything together.

Welcome to the new website for the Ealing sessions Monday class! This is where we’ll post videos and sheet music for the tunes that we learn from September 2018. The old website will still be available here. I will probably tweak the format a little in the first few weeks, to make sure that everyone can find what they’re looking for.

This term will run from September 10th to December 10th, with a break for half term on October 22nd. At the moment, the plan is to play for the Ealing Country Dance Club in December 3rd, and I’m trying to sort out a date for doing a Christmas concert at Gunnersbury Park. Watch this space!

Classes are moving back to the West London Trade Union Club!  We’ll be returning to face to face sessions from September 20th 2021

The Autumn ’21 term (Sept – Dec) will focus more on musicianship skills than on learning new tunes. Everything is taught by ear, though of course you are welcome to make your own notes.

The class is held upstairs at West London Trade Union Club, 33-35 High Street, Acton, London, W3 6ND. Parking in nearby streets is fairly simple, lots of buses pass the door and Acton Central Overground station is 5 minutes walk.
Monday evening term-times: 7:15pm – 9:15pm.
Cost: £10 per night.
Who comes? Bedroom musicians, beginner musicians, starting-again musicians, younger musicians, late bloomers, musicians that think they can only read the dots, musicians who worry that they can’t read the dots – you are all welcome.